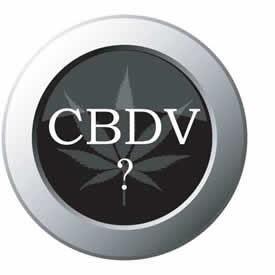 The cannabis plant species makes multiple cannabinoids that don't get brought up much, one of them is Cannabidivarin or CBDV. Cannabidivarin is a homolog of CBD, meaning they have a similar structure. In fact, so similar that, like CBD, cannabidivarin has 7 double bond isomers and 30 stereoisomers. There is a side-chain shortened by two methylene bridges. In layman’s terms, it's a non-intoxicating plant constituent that causes no euphoric response in patients. But the big question about many minor cannabinoids is not what are they - it's what can they do. A bigger question many have is how do we formulate with them to achieve the greatest efficacy in cannabinoid medicine products. Although it seems like a new subject, CBDV was discovered nearly 50 years ago.

The pharmaceutical company that put CBD on the map has done quite a bit of research on this cannabinoid - and GW Pharma didn't stop with that. They've been developing a CBDV-based drug known as GPW2006 to reduce or prevent epileptic and other forms of seizures. Many critics don't quite agree with the making of this CBD pharmaceutical as the first round of GW's work didn't go over so well for many that were involved in trials or tried the drug Epidiolex on their child. Further research was needed and the pharmaceutical entity has continued.

Their newer research has indicated that the cannabinoid CBDV directly affects the neurochemical pathways of the capsaicin receptors involved in both the onset as well as the progression of multiple types of epileptic seizures. The pharmaceutical entity reported that CBDV shows this type of action “across a range in vitro and in vivo models of epilepsy" which is very promising. The thought is that possibly the first pharma CBD was merely a stepping stone to get to one that is far more effective.

A study in 2018 entitled, "Cannabidivarin (CBDV) rescues behavioural alterations and brain atrophy in a mouse model of Rett syndrome" done by the Center for Behavioral Sciences and Mental Health in Rome states that CBDV has shown great promise in helping the neurobehavioral issues associated with this brutal disease that effects mostly young girls. It's caused by an X chromosome mutation that causes extensive seizures and developmental delays that move into further spasticity. What was interesting in these studies is that CBDV helped both genetically created models of Rett syndrome as well as chemically induced forms within the controlled environment.

The Journal of Psychopharmacology published a study in 2019 that showed CBDV's incredible ability to rescue memory deficits in mice that have the same genetic deficit as those with Rett syndrome. In a similar study done the same year in the British Journal of Pharmacology, the cannabinoid was found to be of great benefit to patients with Muscular Dystrophy - specifically Duchenne MD (DMD) which is a disease caused by chronic inflammation and irreversible skeletal muscle degeneration/damage. It was found that not only did it reduce the damage of DMD - CBDV also restored the muscle tone in patients who had extensive damage.

Among other research studies being conducted or already done are on kids with autism, and this is where it's expected that GW pharmaceuticals will once again do phase trials and studies with CBD but this time using a little bit different of an approach. Studies have also indicated the anti-nausea effects of the cannabinoid being so great that the potential to make medicine for this from the plant is there. CBDV acts as an agonist to the receptors in the brain that cause that nauseous feeling - literally turning it off which makes this a heavily promising area of future cannabinoid medicine for cancer patients and so much more.

Scientists have identified over 100 cannabinoids and a total of over 400 constituents in the cannabis plant, which of course includes cannabidivarin. To sum it up, it has the potential ability to relieve convulsions as well as nausea in study and clinical trial. It's a fascinating plant element that we'll all learn more about as cannabis science expands out of its infancy. While many will never see CBDV on its own, it does exist in low levels in many CBD products on the market today - very low trace amounts. It's exciting to watch the mystery of the plant be unveiled as patients lead the way in showing the research field in what they can do with plant extracts. It takes anecdotal cases and case studies of them in order to create the interest that eventually will create science-based evidence that the world of cannabinoid medicine desperately needs.