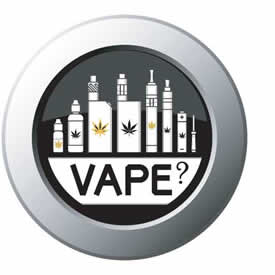 From the stage of a very busy expo with thousands in attendance in Las Vegas, an announcement was made during a panel on Vape Safety. Every year, both Vape International and CBD.io share the same big space at the Las Vegas Convention Center. The only way for an individual with Epilepsy and a history of Cancer to safely consider vaping Nicotine - was to reconsider. What was more intense is I made this statement after talking about various issues in regards to vaping THC, literally trying to avoid talking about what I used every day and throughout most of the day. Being put on the spot is never a fun thing and knowing that you could be, due to your decisions, can make a person on edge. I suppose that led me to vape even more nicotine than I would have without all of those factors - I always knew it couldn't be good. After smoking for 30 years I always considered vaping as a very healthy habit. After all, I smoked at least 2 packs a day and that kills tons of people. But vaping is innocent - or is it?

When I made the statement from the stage I also made an oath: I would quit within the next 45 days or by the 1st of the year. I made good on that promise to the public - and made sure I would by putting it all on YouTube so I'd be reminded at anytime I got weak. But there was no reason to get weak as the research I did on myself showed serious dangers for those of us with Epilepsy when it comes to using vapes, especially the bigger types like I used at home and anywhere else I could get away with that blows big clouds of vapor. For some reason those obnoxious clouds relaxed me more than the nicotine. After quitting Nicotine I've utilized CBD vape liquids temporarily to still get a bit more vapor but quickly I'm moving over to cannabinoid concentrates used with a controlled heat device to vaporize. But why did I make such a bold statement? Was it because I was embarrassed about chasing those clouds? No, that's not it at all. I bought a pulse oximeter after experiencing some seizures in 2019. I figured I could check my blood oxygen levels and see if desaturation or ‘desat’ was occurring; a condition in which the oxygen in your blood lowers quickly. This always happens before a seizure. This is when I realized the serious risks for people with Epilepsy - and it's also when I realized how addictive vaping nicotine was. When a person smokes they don't have a cigarette in their hand lit 16 hours a day or more, but when a person is vaping it's always around both indoors and out. A person randomly takes puffs off the thought vaping is safe, but has a session when they smoke and are done. And therein lies the difference that's rather significant. The more nicotine you get the faster the heart rate, and the more you puff away the lower the blood oxygen drops; both are triggers for seizures.

I had this all figured out more than 90 days before the event I was a speaker at, but did I quit? No. I would put that pulse oximeter on my finger and vape nicotine. I watched as I'd drop from 100% 'saturation' of oxygen in blood down to only 94 and I'd think to myself, "Just open a window and get more air." I was fooling myself as I had quit smoking in 2014 long before I picked up the vape. I didn't quit smoking and use a nicotine vape to do that - I used a CBD vape back then instead. After a long bout with distended shingles (that's when they're all over the place and last for months) I picked up a Nicotine vape as I was so stressed. The thought of a cigarette was out of the question as I had cancer at that time - and the vape seemed so subtle and harmless. I was very, very wrong. The chemicals in the flavorings and many of the juices are actually carcinogens. Nicotine itself is addictive and bad for your health, but it's not a carcinogen like the tar and other components of tobacco products. The problem is the cheap juices, and mixing of juices and flavorings, as well as the ongoing availability to vape which isn't good for your heart with the sudden drop in blood oxygen. Clearly, it's much more than a single problem. When I put that meter on my finger one day before the expo and vaped, while walking, my blood pressure skyrocketed. Normally, it’s 110/70 but it went up to 190/105 and my pulse, which is typically around 80, shot up to 118. So I went outside and tried to get my (out of shape nearly 54 year old) body to take a little jog - only 100 feet maximum. Then I put that meter on and vaped as I watched my pulse move from 104, from the run, on up to 128. Even then I wasn't smart enough to put it down. I had to keep vaping and kept justifying it with the fact I quit the use of pharma opioids - a 24 yr. habit was gone so this one was harmless in my mind. But I knew it wasn't.

Together, my fiancé Anne Mari and I made a pact that we'd quit at the stroke of midnight on the New Year. Both of us poked fun at each other - even wagering against each other’s willpower. "I bet you won't last 2 days before you start asking for it back", I'd joke with her…"I bet you'll miss it forever because you can't have it back", she'd reply. I made sure I couldn't have it back by using my researcher brain and looking heavily at the past few years of nicotine vaping - they came with one thing that I had been without for years - breakthrough seizures. The correlation between the return of petit mal, or very small seizures, and the start of vaping is undeniable. The testing I did on myself using that meter proved the desaturation ability of the vapor and how dangerous it is for someone with a seizure disorder to be vaping all day like I used to. When you're addicted to nicotine - that's what you do. Throughout the day the vape is available and in bed at night it's not like a cigarette that stinks. And if you both have one then it's no foul at all, just vape away for hours as you watch TV and go to sleep. But this is a fairytale with a not so happy ending - lying to yourself generally never works out well.

When we quit vaping it was a rough few weeks and to this day I'd be a liar if I said I didn't miss the feeling of holding that big vape and taking a big rip off it. But I don't miss it much as when I look at the history compared to the now, there's a huge difference. My blood oxygen levels are back up to 99% or 100% all the time. I'm vaping cannabinoids and finding interesting combinations that work so intensely but, unlike that nicotine vape, I'm not doing it all day long and definitely not while in bed. I discovered that the increased heart rate nicotine vaping caused did not help me to relax and sleep at night; instead, it caused me to stay awake much later than I needed to. As it is Genevieve, our severely autistic daughter, wakes up throughout the nights quite often so rest can be interrupted. I always thought vaping allowed me to 'handle the stress better' with that and just about anything that would cause it. Again, I was very, very wrong. The addiction to nicotine made me stress out about where I could vape, when I could vape, and could I bring it to where I was going? I literally avoided places I couldn't vape at just like a cigarette smoker avoids the non-smoking section. I developed an addiction to an over-the-counter thought to be a good replacement but, without a doubt, nicotine vaping is a hidden killer that goes unaddressed. Nowadays we talk about the tightness in my chest I'd feel (and not talk about), the small seizures I'd have (and not tell even my fiancé about), and the way we literally lie to ourselves to allow these types of addictions to occur.

As I said from the stage in Vegas, I was quitting vaping for my own personal reasons. Those definitely apply to tens of millions of others who may also be in denial about what an increased heart rate and decreased oxygen supply might do to their health condition - and for this reason I decided to write about this subject. So many of us will make decisions we don't want others to question like I did with nicotine vaping, and when people question it or bring light to the negatives we jump to defend what possibly could be what kills us. This holds true for just about every addiction we have whether it's to a physical object or it's a mental obsession. But when the shoe falls and the hammer drops - we all make decisions based on our own wellbeing - or at least we should. Quitting vaping came along with dietary changes at the same time so it's a whole health approach. Anne Mari just got a big exercise ball in the mail so we can both start stretching and I'm looking into going to a Hot Yoga class with a local friend. I'm eating very low carbs and no bleached sugars or flours at all with a 'whole foods' approach as I get my body literally ready to exercise on the regular after over a year of being stagnant in the long pharma withdrawal of 2019. In the last 40 days I've lived without nicotine and must say it's been way more productive - and even better those dietary changes have allowed me to slowly shed 12 pounds. I learned a lesson in all of this and it's a simple one - quit giving advice to others while being unwilling to accept it. What I shared about vaping and epilepsy was shared with me by a doctor I heavily respect, and I look forward to meeting with her in 10 days to tell her the news of my freedom from nicotine vaping!